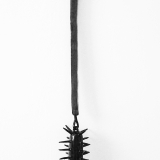 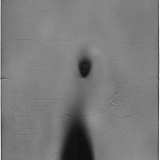 Can one get close to things as mere things? Hardly, things are always distorted by memory and convention in the most confusing ways. What’s more, these external referents fluidly transform themselves over and over at the moment of encounter, although the thing itself may seem unchanged.

So can one set aside this constantly shifting cloak of associations? Would one actually want to? What exactly would a thing be, about which one has no information? One will, as a matter of course, give the thing a name, weigh it and measure it, in order at the very least to be able to say something about it. One is compelled to act in this way. To describe objects is to participate in society, in ‘communication events’. The undressing of things to a naked state of pure being is the cloistered and silent preserve of monk-like higher meditation.

To hell with things. In this exhibition of work by Jennifer Bennett and Alexander Hoepfner, the flowing states of descriptive material that attach themselves to things are presented, crystallised, in absentia rerum.

Jennifer Bennett’s glassy-surfaced sheet-metal and ceramic sculptures have their origins in the city. Bennett is interested in barriers, obstructions and chicanery, which, like the politics of urban construction work, channel people through the city; the artefacts of public space. Bennett does not document the city, however, and the relationship with her starting point in urban realpolitik is thrown into precarious doubt by the fact that her art work consists of delicately rendered entirely new objects, that hardly seem to evoke the atmosphere of the real-politikal. The route back from this doubt is in the name itself, real, that relating to or derived from things (res). Bennett’s work then is the sloughed off after-imagery of this urban clash of things, of systems, designs, objects and life, and becomes all the more bewildering for this realisation. The solid knowledge one assumes from the equally solid objects that one encounters every day becomes shaky. What should one really think about a sheet-metal ramp, that provocatively reminds one of a reclining chair, and simultaneously a traffic sign?

Alexander Hoepfner’s paintings are made by digging down through layers of applied paint. As Hoepfner well knows, the first mark a painter makes on a canvas establishes a circular problem of artist and artwork, an endless battle of wits against one’s own subjectivity from which one can never escape (incidentally, one can’t escape this battle in any other realm of life either). Hoepfner’s quixotic task then, has been to attempt to outwit this problematic, and therefore himself, by beginning a process of removing such marks. What is left still untainted beneath the last layer of paint? What really happened last week, or the week before last? Holes in general are, in a pleasant way, provisional – an optimistic beginning. But Hoepfner is not mining to exploit buried riches, nor is he tunnelling conduits for the smooth transport of information. Sanded areas, holes or openings in the painted surface, all fulfil a common function: to deny the painted image a final resting place in one’s thoughts, hanging it in a limbo-state of permanent suspense. 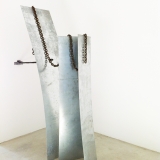 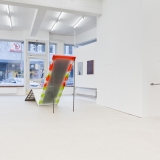 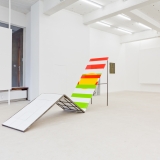 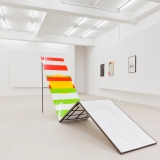 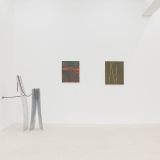 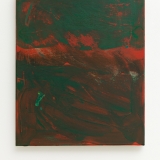 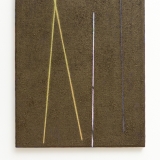 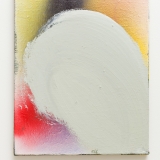 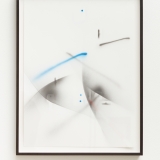 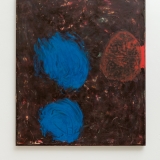 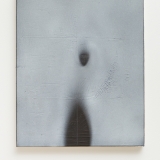 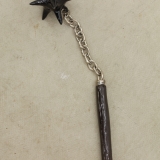 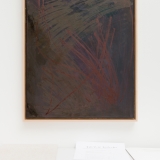