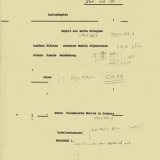 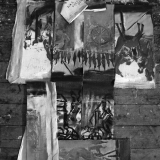 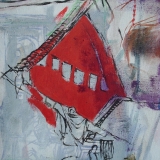 Nele Budelmann, Axel Loytved, Max Frisinger.
In attempting to make an exhibition of paintings by the artist Nele Budelmann, one runs immediately into difficulty. Budelmann’s paintings are large, and many in number, and they demand to be represented in something like the quantity that they are made. Budelmann’s imagery is an ongoing confusion of romantic orientalism, tempered by a critical and ironic sense of occidental folly and self-awareness. What may at first seem like the troubling fantasies of an out-dated European idea of ‘the east’, reveals itself across the span of Budelmann’s work to be an analytical acknowledgement of the disturbing attraction of cultural exoticism, and the essential ambivalence at the heart of the relationship between the individual and collective cultural forms.

As difficulty seems to be present from the outset, not only in terms of thematic complexity, but also in terms of accurately representing Nele Budelmann’s work in one exhibition, Dorothea Schlueter has invited two other artists into the gallery alongside her. These two will help Budelmann to bear the burden of her own representation, on more shoulders than hers alone.

The first of this pair is Axel Loytved, who will show small bronze objects cast from the detritus of his own trouser pockets. This perverse and neurotic manifestation of the proverbial act of ‘naval gazing’ – for what is the trouser pocket if not a ballooned and baggy displacement of the belly button? – results in a defiant and singular sculptural proposition. Rather than retreating into its own banality, the solidifying in heroic bronze of accretions of fluff, mucus-infused tissue shreds and forgotten bus tickets, prompts the realisation that the fumbled imaginings of any artist, no matter how grand the ambition, may be of as little interest to the rest of us as so much lint. Paradoxically, Loytved’s odd and formally complex delicate bronze objects capture again that very interest in their striking coral-like beauty and singularity.

Set in dialogue with Budelmann’s chorus of paintings, the balancing of opposing desires – the wish to surrender to introspective isolation on the one hand, the ambition to reach out and communicate with the outside world on the other – becomes a point of discussion between the two artists. Loytved’s renunciation of his own private imagery (whatever that may be) in favour of the accidental clumps that self-sculpt through his pockety process can seem to denounce the flamboyance of Budelmann’s paint-splattered inner life. Yet this relationship can also resolve into silent respect, the repressive compulsion behind Loytved’s objects seeming to long for and admire the chaotic release of Budelmann’s exploding creative cosmos, and vice versa. Stepping back from the apparent driving impulses of both artist, and allowing for a dimension of self-awareness in their activities, Budelmann and Loytved enable questions of locality, and the tricky nature of the interpersonal, intercultural and trans-temporal integrity of meaning to be elegantly articulated in each other’s work.

The second of the two artists invited to join Budelmann is the sculptor Max Frisinger. Frisinger will not show any of his own work, but will be responsible for the design and arrangement of the exhibition. The cool formal containment that Frisinger brings to his own sculptures, rigorous cuboids framing airy jumbles of cast-off junk, will be the organising principle along which a kind of ornamental psychogarden of Budelmann and Loytved’s work will be constructed. 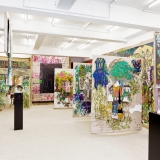 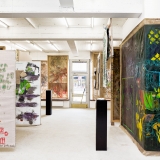 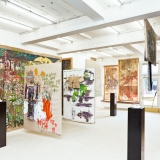 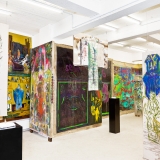 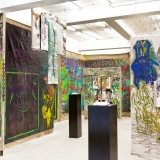 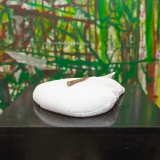 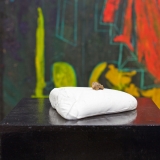 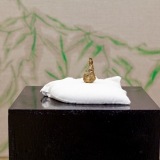