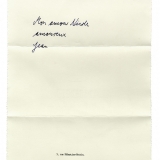 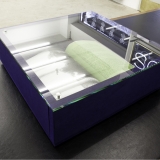 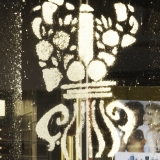 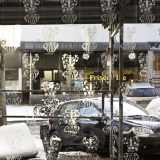 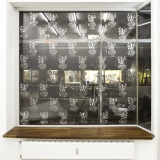 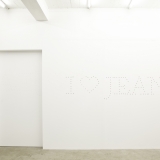 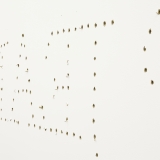 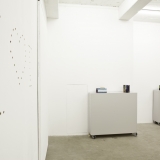 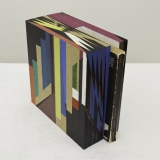 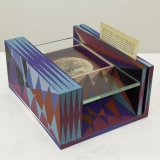 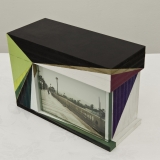 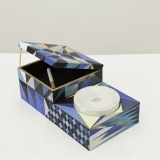 Nicole Messenlehner has re-built the prison set from Jean Genet’s notorious film “Un Chant d’Amour”, in the gallery. Based on Messenlehner’s interpretation of the spaces shown on screen, she has divided the gallery into two different rooms, the second of which can only be viewed through holes in the wall of the first. The actors are no longer present. What remains is the formal aesthetic of a gallery, with its determined organisational constraints. In the office, Nicole Messenlehner presents the first issue of the magazine “Kultur & Gespenster” on Hubert Fichte, alongside the German publication of Fichte’s interview with Genet from 1975.

“Un Chant d’Amour” shows an older man delirious with desire, yearning for physical contact with a boy in the neighbouring cell. This love story climaxes emotional with a cigarette shared between the two of them, one blowing smoke to the other through the thick prison wall with a straw, all observed by a sadistic and jealous prison guard. Genet had no time for parables, allegories, or other morally instructive hokum, rather the reverse. When he showed brutality or obscenity, he intended exactly those things. Tales of rescue or resolution were alien to him. Unafraid of confronting abjection herself, Nicole Messenlehner uses this exhibition to paraphrase a certain artistic attitude. This confrontational affectation has never been able to stir great enthusiasm in artistic institutions, but is conversely highly prized in the swirling collective imaginations of artistic communities and culture geeks.

Jean Genet (1910 – 1986), a prominent French author, vagabond, rent boy and thief, spent the greater part of his youth in prison. He wrote novels, plays, poetry and essays. His work describes an underworld of male prostitutes, pimps, criminals and outsiders. “Un Chant D’amour”(1950) was Genet’s only film. It was banned from cinemas on the grounds of its pornographic imagery, and only received its first public screening in New York in 1964. As a result, Jonas Mekas, the organiser of this screening, was beaten by police and imprisoned. Over the years the film has been gradually accepted as a masterpiece, although Genet himself came to hate it.