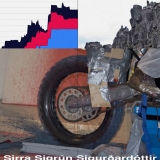 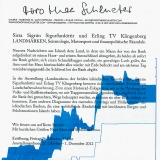 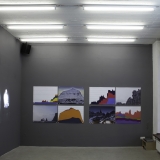 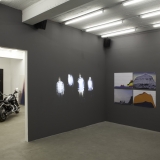 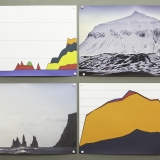 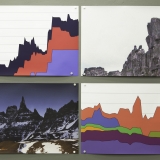 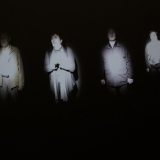 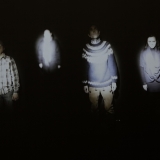 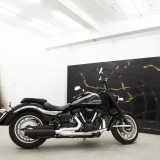 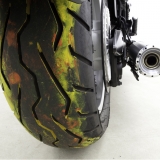 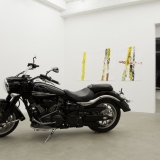 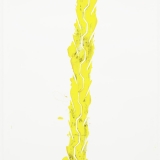 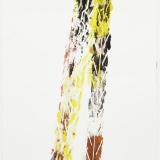 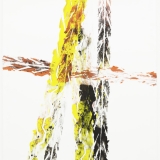 Landmarks, Seismology, Motor Sport and the Scandal of Politics and Banking

Some news from Iceland: a man instructed by his bank to hand over the keys to his house and his car hired a large digger, dug an enormous hole, and pushed both car and house into it, piling the earth back on top. The next day, as arranged, he handed over both sets of keys to the bank.

Everyone orientates themselves on landmarks. It doesn’t matter what they are: a pile of rubble, a construction site, a single standing tree, a rock formation or a flat-topped mountain, all serve equally well.

In the exhibition “Landmarks” the Icelandic artists Sirra Sigrún Sigurðardóttir and Erling TV Klingenberg cut intersections between differently marked out landscapes. The landscape of motorcycle escapism, like a German bank commercial: lone trapper’s paths opened up by the empowering roar of an internal combustion engine, the thrusting power of banking opening up limitless freedom. Opposing this lionised liberation are towering heights and sundering chasms, graphs that plot the sudden rise and ensuing descent into hell of the Icelandic banks, the brutal verticality of these peaks and troughs an uncanny mirror of the mountains and gorges of Iceland itself.

Sirra Sigrún Sigurðardóttir’s Tremors show landscapes where all orientation has broken down. People are filmed standing on an earthquake simulator, the action starting after the main shock has occurred. The films show the still reeling disorientation of aftershocks, a recurring experience that confuses as much the tenth time as the first. Such emergencies are no time for poetic subtleties: the repeated tremors in Sirra Sigrún Sigurðardóttir’s films hammer home a parallel with Iceland’s financial collapse, and the aftershocks that continue to rock Iceland’s society and institutions.

Perhaps a good way to avoid feeling the smaller earthquakes might be to jump on a motorbike and redline off into the landscape. The growl of the engine and clouds of dust should mask the shuddering ground, or the social collapse, depending on what kind of quake you’re trying to get away from; literal or metaphorical (or perhaps in Iceland, both). Although Erling TV Klingenberg is no willing petrolhead, he has nonetheless been driven to co-opt the motorcycle. What subtle gesture of obtuse conceptual art can still be recognised in the thundering overnight collapse of the state? Klingenberg uses a motorcycle as tool to paint with. Like a dog flinging earth out behind him with a gnarly paw, Klingenberg sprays paint up with a wildly spinning revved up rear wheel. Stupidly dangerous and pathetically impotent, the bike is raised off the floor and can go nowhere. The paintings that result from this dare-devil mud flinging resemble the silhouettes of vertiginous peaks.

We would like to thank Heuser Motorräder for their generous support in realising this exhibition.